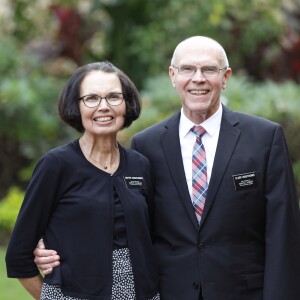 Sister Osguthorpe was born and raised in Riverside, California. She attended Brigham Young University and graduated with a degree in Child Development/Family Relations and Elementary Education. Elder Osguthorpe was raised in the East Millcreek area of Salt Lake City. They met the summer after Elder Osguthorpe’s return from his mission to Tahiti. Their courtship consisted of daily rehearsals in the BYU a cappella choir and traveling to and from Salt Lake City weekly to sing with the Mormon Tabernacle Choir.

After marriage in the Salt Lake temple, six years at the university, and three children, Elder Osguthorpe earned a Ph.D. in instructional psychology. They then moved to Rochester, New York, for Elder Osguthorpe’s first position and immersed themselves in raising their five children. After four years in New York, they returned to BYU, where Elder Osguthorpe served as a faculty member.

Sister Osguthorpe has devoted much of her life to teaching children and youth in whatever callings and opportunities came her way. She taught sixth grade for ten years in the Provo School District. They also served as Mission President and wife in the South Dakota Rapid City Mission. Elder Osguthorpe has served as stake president of a married student stake, area seventy, and Sunday School general president.

After retirement, they served together as temple president and matron of the Bismarck North Dakota Temple. They are currently serving as missionaries in the Hawaii Honolulu Mission, where they teach religion and education courses at BYU–Hawaii. Last year they celebrated 50 wonderful years of marriage and rejoice in their five children and twenty-three grandchildren.