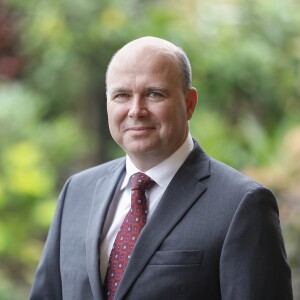 Jarod was born in London, England and immigrated to Auckland, New Zealand with his family when he was three years old. Raised in New Zealand, a proud Kiwi, he served his mission in The Wellington, New Zealand Mission and received a bachelor’s degree from The University of Auckland in commerce in 1994. He has worked in various financial roles including Financial Controller and Assistant Area Director for The Church Education System in the Pacific Area. He is currently working as the Chief Operating Officer at The Polynesian Cultural Center.

Jarod has served in many church callings with his favorite being Nursery Leader. He loves snorkeling, fishing, going out in his Hobie sailing kayak when the winds right, and spotting turtles, and the occasional shark if he’s lucky. He enjoys a relaxing getaway, with one of his bucket list highlights being swimming with a family of whales in the beautiful islands of Vava’u, Tonga. Jarod likes board games and all the competition and chaos that goes with it. Eating out and discovering new foods is also a delight to him and his wife, Pria.

Jarod and Pria have five children, two grandchildren, a dog, a cat, and about one hundred fish.